Disclaimer: This post includes Amazon affiliate links. If you click on one of them and you make a purchase I’ll earn a commission. Please notice your final price is not affected at all by using those links.

Welcome to another post part of the series covering Quality Attributes / Non-Functional Requirements, this time I’m talking about Testability.

According to Software Architecture in Practice:

There’s also this concept called Test Automation Pyramid, introduced in Succeeding with Agile, used to define how much work we should do and how many tests we should implement depending on the layer we are trying to test.

This layering is similar to the one I discussed previously when I talked about Domain Driven Design. 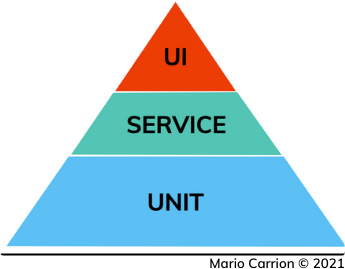 Because in the context of this post we are building Backend APIs I like to add a few things to the original pyramid: 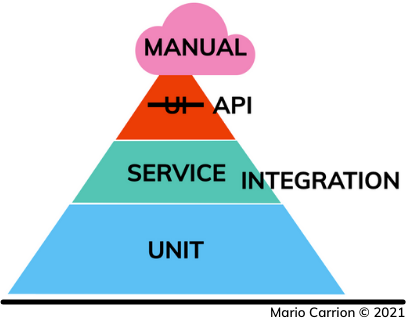 Depending on some characteristics associated to the project we we are building, like deadlines or the available resources, there’s usually a compromise to be made to deliver the project on time, sometimes not implementing tests is that compromise.

We should be really careful when making decisions like that where Testing is not considered a fundamental part of the software being written, this is better put in perspective if we refer to the paper The Economic Impacts of Inadequate Infrastructure for Software Testing published by the National Institute of Standards and Technology, which among other things measured the relative cost to repair defects depending on the phase of the software development where the repair has to happen:

What this means in practice is the further along the project is, the harder it will be repair defects if testing wasn’t built in the first place.

Idiomatic testing in Go consists of using Table Driven Tests, for example using the Priority type we have something like the following:

In cases where code requires datastores and there’s a way to use docker for them I prefer using the ory/dockertest package, for example for postgresl.Task if we want to test the Create method something like the following could be implemented:

If you notice this is not following the table-driven approach, this is intentional because in cases like this the code used for interacting with the datastore already has a concrete goal (it uses Repository Pattern) so there’s no logic other than actually executing the corresponding calls need to the communicate with the datastore, which in this example is executing the SQL INSERT command.

Testability as a Quality Attribute is fundamental for any software project, specially those meant to last longer, thankfully in Go testing support is already included in the standard library and only a few packages could be needed to enhance the testing experience, like ory/dockertest, dnaeon/go-vcr and h2non/gock.

If you’re looking to sink your teeth into more Software Architecture, specifically regarding Testability I recommend the following content: