Previously I wrote about events using RabbitMQ and Kafka, this time I take a similar approach but using the Message Broker feature of a different tool called: Redis.

Redis works really well under heavy load, I’ve been using it for more than a five years already and it never disappoints, it provides different features that could be relevant to the problems you’re trying to solve.

This time I’ll describe using the Pub/Sub support for messaging between different services.

Redis supports this paradigm and defines different commands for publish, subscribing and unsubscribing; it even supports pattern-matching subscriptions.

One really important thing about the Redis implementation is that the channel doesn’t store any message, if there are no subscribes the messages are sent to nobody, therefore they are lost: 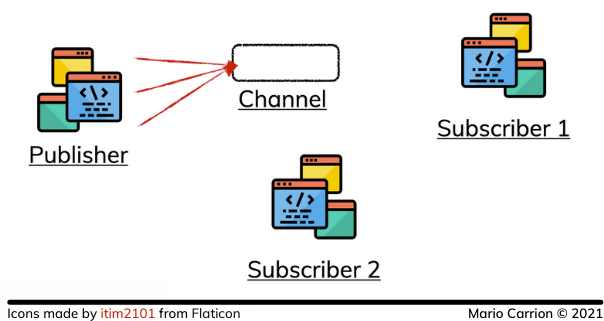 But, as expected, if subscribers are present then the messages are sent to the clients listening for those values: 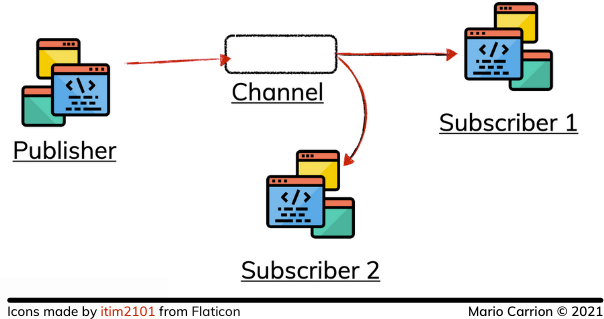 For Go, I recommend using the go-redis/redis package because it allows you to access Redis in a type-safe way.

Our redis.Task type is the repository in charge of publishing the events to different channels, the code is similar to what we did in the past:

The biggest difference is that in this case each message type is using their down channel, this will be much more clearer when we look at the subscriber.

Similarly to what I did in the past, I had to build a new service in charge of receiving those events to update the Elasticsearch records. The key part of this new service is the usage of pattern-matching for subscribing to multiple events:

With both pieces in place every time a customer interacts with our REST API a message will be published and then consume by the subscriber that in the end will update the ElasticSearch records.

Using Pub/Sub with Redis is a simple way to implement messaging between different services; however compared to similar tools, like Kafka or RabbitMQ, we need to be aware that those messages are not stored in Redis, not even temporarily, so if there are no Subscribers already listening for those messages then all the published messages will be lost, so depending on the use case this perhaps not the best idea.

Think well about the problem you’re trying to solve, maybe Redis is the lightweight solution you should be using.

Talk to you later.

If you’re looking to do something similar in RabbitMQ and Kafka, I recommend reading the following links:

This post includes icons made by itim2101 from Flaticon