Next planned trip after San Francisco was Denver! To attend GopherCon for the first time ever!

We took off early Sunday morning because I was attending the Architecture & Domain Modeling with Go kit workshop next day and because we wanted to explore a the city and the surroundings before kicking off everything GopherCon next morning.

First unexpected surprise was getting a cool keycard at the hotel, it is a great souvenir for sure.

After checking in we decided to start our quick Sunday tour, sadly we weren’t able to explore too much, but we did go to the Coors Brewery to take the tour, it’s always nice to see how everything comes together to deliver a final product, specially beer 🍺. The tour was a bit underwhelming because it takes too much waiting in line to see too little. But beggars can’t be choosers I suppose, considering the whole thing is free (you only have to line up and wait for a bus) and it also includes some free beers at the end. 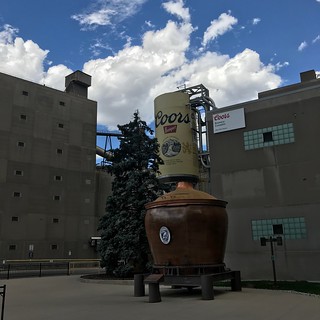 I’d say the overall Golden, Colorado experience was ok, mostly because we were stuck trying to come back to Denver, Lyft drivers didn’t want to bring us back, which in the end made us take a regular, and really expensive, cab to come back. We still like Lyft though.

To end on a high note our zeroth day we decided eat dinner out. We found a Mexican restaurant close to our hotel, walking distance actually, called: La Loma. We did not know anything about it and, for a second time today, we were pleasantly surprised, nice food, good portions and not that expensive. Highly recommended.

In the end Sunday was fun and we enjoyed it. Looking forward to starting GopherCon week tomorrow!

First day of GopherCon consisted in registering and attending the Architecture & Domain Modeling with Go kit workshop by Peter Bourgon, the default swag we got for attending the conference is awesome.

There was a booth were you could buy more swag, I was able to “snatch” a Cowboy Gopher, some t-shirts and extra stickers for my crew, sadly I was not able to buy a hoodie, it looks like it was a pre-order only item, I will try later this week to see if there are more available. 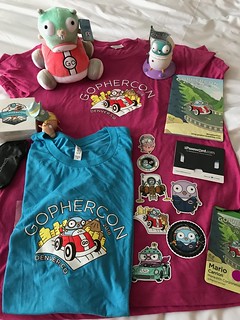 Regarding the workshop, it was a bit click and bait-ish because Go kit was not really the focus of the workshop however I liked Peter’s honesty, he was clear about it from the beginning and he mentioned it right away. In reality after completing the workshop I understood Peter’s rationale. The workshop sole focus was to architecture and design services using Domain Modeling, and in the end it all made sense when Peter introduced Go kit to update the existing implementation of the project we were using for the workshop. 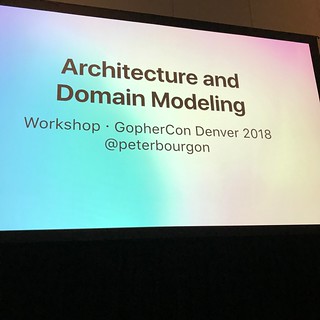 We finished the workshop a bit early, that gave me a tiny window to rest, reset and have dinner with my family before going to the last stop of the day: Gophercon Pre-Party Meetup. This meetup happened at SendGrip, nice location, although because of the amount of people (100+ attendees) it was a bit hot, either way I learned a few tricks after listening to the talks, cool stuff. 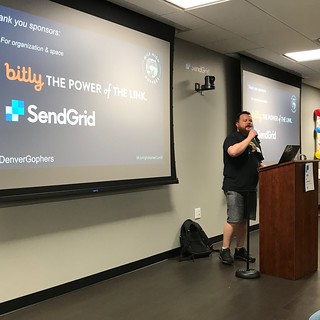