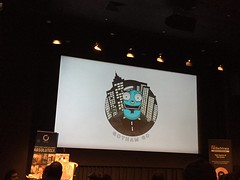 Finally what everybody was waiting for: conferences day!!

GothamGo 2016 had the NYIT Auditorium on Broadway as the venue, which is basically just medium-sized lobby with an auditorium downstairs, with a max capacity of 280 people, or something like that. The auditorium is cool, I think for event it made perfect sense, and I’m glad there was free Wi-Fi because there is no signal downstairs.

Either way, the venue is not that important what is important is the speakers themselves and their talks, it is worth mentioning the phenomenal job done by Mark Bates and Steve Francia as the MCs, they ruled as Master of Ceremonies. Also the activities in between the talks were really cool, that scavenging hunt? that was fun.

We have @spf13 and @markbates on staging getting everyone to play Speaker Bingo. #golang @gothamgo pic.twitter.com/dCKihi8Qos

The GothamGo 2016 program included a little bit of everything, from beginner talks to community related talks and obviously some really technical ones. I took a few pictures of the talks, sadly I kind of stop paying attention and forgot to take pictures of a few of them. Shame on me. The good news is that a lot of people were active on social media, so just search for #GothamGo on twitter.

In the end it was great experience, first time attending a Go conference, the community really seems to be involved and really willing to share their knowledge to make the language much more popular.

The stickers are really cool as well

See you next year